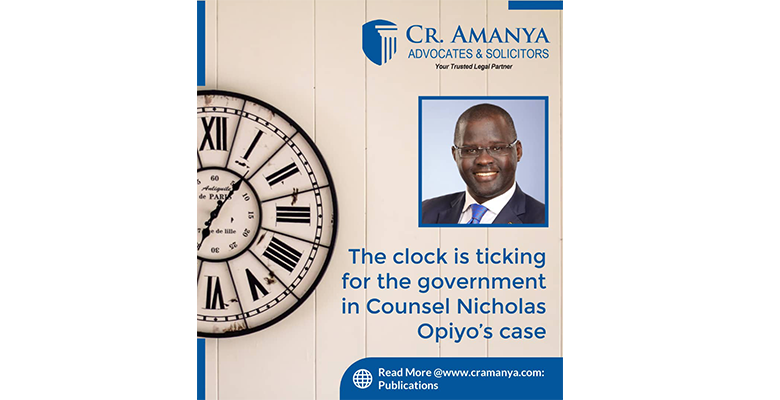 If there is someone having sleepless nights these days, it is the Prosecutor in the matter of Nicholas Opiyo Vs Uganda, Criminal Case No. 106 of 2020. You all remember that case on 22nd December 2020 when Nicholas was arrested from a restaurant in Kamokya and social media was awash with #freeNicholasOpiyo. He was charged, taken to Kitalya prison and eventually released on bail on 31st December 2020. Todate, Nicholas’s trial has never taken off.

Apparently, Counsel Nicholas Opiyo, a renowned human rights lawyer received USD 340,000 (approximately Ugx 1,200,491,347 Uganda Shillings One Billion Two Hundred Million Four Hundred Ninety One Thousand Three Hundred Forty Seven Cents) on Chapter Four Uganda’s ABSA Bank account. This money is said to be proceeds of a crime and he was charged with the offences of Money Laundering C/S 3 (c), 116 and 136 (1)(a) of the Anti-Money Laundering Act, 2013.

So since then, Counsel Nicholas has been going to court but the prosecutor says investigations are still ongoing and not yet complete. This prompted Counsel Nicholas and his lawyer, prominent Counsel David Mpanga to apply to court to dismiss this matter. In an interesting judgement delivered by the very sober judge, Justice Lawrence Gidudu, it was decided that indeed the Constitution requires Courts to determine criminal charges speedily. In a way of balancing the interests of both Nicholas and the government, Justice Gidudu has given the government seven (7) days, to commit the applicant for trail before the High Court and disclose the case to the applicant. The judge ordered that if after 15th September 2021, the matter has not proceeded, then the prosecution of Council Nicholas in that criminal case shall stand terminated.

We wait to see how this pans out and will keep you update.